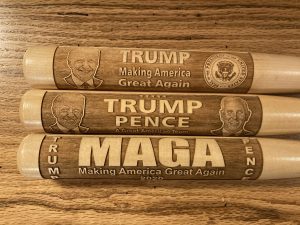 In May we were contacted to craft and create our Trump MAGA Keepsake Bat in mass for distribution across the country to thousands of Trump fans.

Our existing laser department became unable to keep up with the the growing demand. New lasers were delivered in July an Epilog Fusion Pro 48 80 watt and second smaller version in August. Kong. And. Son of Kong
arrived in the nick of time to prevent disaster in production. We began to be able to produce 2 to 300 presidential Keepsake Bats every day. Our shipping department evolved to a fine working machine and we were able to ship between one hundred and 150 packages every day. It was quite exhilarating to have it all going at warp speed without a hitch. Many long nights at the shop were sacrificed and dedicated to the cause. It was all hands on deck  battle stations.

175 days after May 12 we concluded the project with almost 6000 bats 5000 tire checkers and 750 full-sized baseball bats were created packaged and shipped from the Ozark classic craft mall.

It was quite an adventure and I’d like to thank everyone who helped make it happen. From our customers to the staff   Thank you. it became a monster because we all pulled together as a team. Thank you so much.

ps. We are just getting started so stay tuned